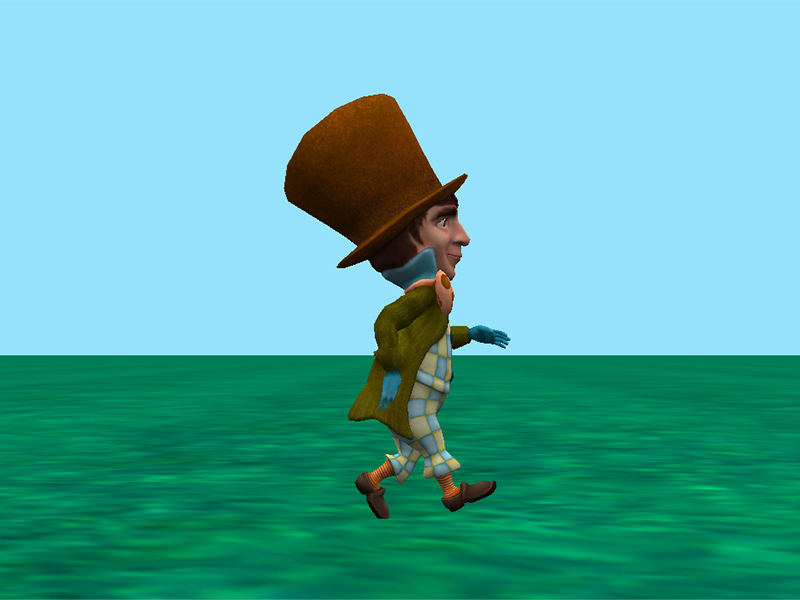 Alright! Let’s talk Biped walk animation. When animating in Alice, it is important to know how the joints work. Please review the Manipulating Biped Joints how to for a break down of all of the joints and movements.

A Walk Cycle
When creating a walk animation you want to create something that can easily be looped since most times a person doesn’t just take one step. In animation we call this a cycle.

When walking you don’t return to a full standing position each time you take step. To avoid having your walk animation do this we first create an animation to bring the character into a pose that matches a position that a character would be in repeatedly while walking. We usually chose a point when the character is fully extended in a stride. This initial set up animation we call the Walk Start.

Once your character is in the starting pose you can create an animation that replicates a full movement that includes the limbs swinging/kicking to the opposite position and then returning to this initial pose. By doing a full cycle we insure that they are now ready to do the same animation again and the positions at the start of the animation will line up.

A Natural Walking Motion
One way animators study for their work is to videotape themselves or others and break down what they see. If you want to create an animation that matches your walking style have a friend videotape you and try to break down what joints are moving when.

At the core of the walking motion are the movement of the legs and the swinging of the arms. The arms swing to counter to the leg motion. This means your right arm swings in sync with the opposite or left leg.

For a more detailed breakdown of the different movements, joints used, and descriptions of the different implementations supplied for use or guidance please review the full quick reference document.