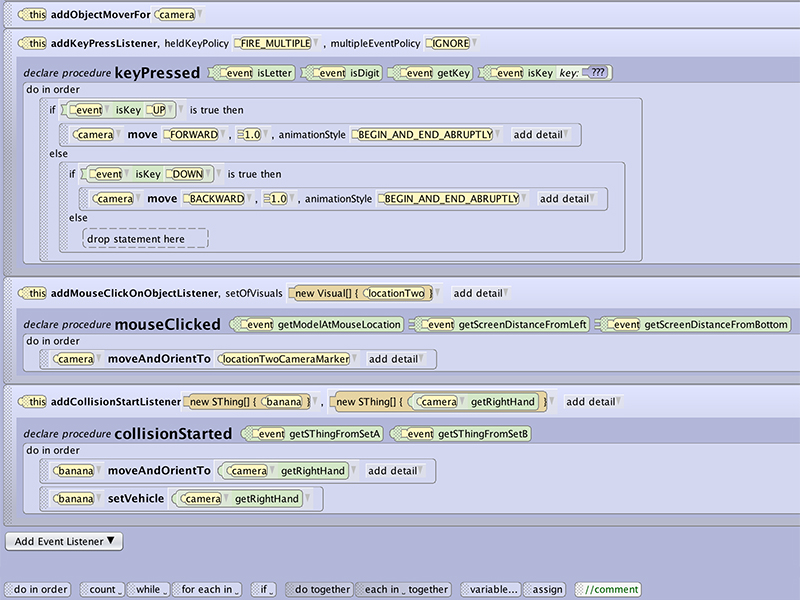 The Alice Player will now run in VR. This opens up the use of the VR Headset and the VR Controllers. This is an area of Alice that is actively under development so this information will continue to be updated. It also varies slightly between different VR platforms. We will continue to update and add new VR platforms. We hope to add new interface language and views in the Alice IDE (Authoring Platform) but for now the majority of the programming for VR makes use of mapping existing Alice events and objects to the VR space and controls. This is an overview of the available functionality. View individual How tos for directions and examples of setting up and using these different events.

The Alice Camera in VR

The Alice camera object maps directly to the VR Headset. For spatial VR this will allow the user to move in space. You can program the camera the same way you would in a traditional Alice world to move via user input (deaultObjectMoveFor, Keypress Events) or procedural moves that are applied to the Camera.

The default position of the Alice camera object has a slight downward tilt built in. This will set your VR space at a slight angle. If you are authoring for VR be sure to level your camera space by using a orientToUpright One Shot procedure for the Camera object in the scene editor.

We also will be adding VR objects(joints) under the Camera object to give more flexibility for intentional programming around moving the user relative to the VR space. More to come on this.

defaultModelManipulation works by pointing and clicking on the object and then dragging it around the space.

addMouseIsOver – We are working on a mouseover event that would then map to a point at event to help program things that don’t require a mouse click to trigger including being able to have objects highlighted when the controller is pointed at them.

VR hardware generally doesn’t have a keyboard attached but does have a number of buttons. We have set our keypress events to map to different VR controller buttons. This is dependent on the different hardware for the number and nature of available buttons. We will update this as we set-up, test, and validate different platforms. We currently support the following:

We are thinking about adding a second set of failover keys for the second joystick that is included on many VR platforms so that you can program separately for both joysticks.

We have added objects to the Camera that map to the location of the controller objects. These objects can be used to vehicle objects to the controllers for visibility in the VR space, and for programming controller collisions. You will find these objects on menus that they can be sued for such as vehicle to drop downs and collision event object array constructors. They use the rightHand and leftHand naming convention mapping to the left and right controllers.

Our goal is to make it so that you can easily use Alice authored worlds on both desktop for building and testing and in VR. There will be additional VR specific events that we hope to add in the future.