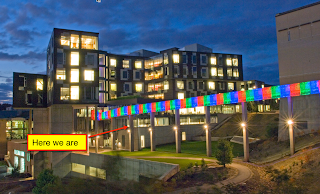 Perhaps some of you have been wondering why this blog has been entitled, Alice News from Under the Bridge. It is possible that the title brings to mind the Three Billy Goats Gruff, a scene that students will be actually be able to animate in Alice 3.1.

Actually, the bridge referred to is the Randy Pausch Memorial Bridge on the Carnegie Mellon University campus.

Commemorated in 2009, the Randy Pausch Memorial Bridge is a pedestrian bridge built in honor of the late Randy Pausch, a professor of computer science and human-computer interaction and design and (the founder of the Alice Project) at Carnegie Mellon University who passed away in 2008. The bridge symbolizes Pausch’s commitment to bridging the gap between the arts and computer sciences by linking the Purnell Center for the Arts with the university’s new Gates & Hillman Centers.

It turns out that the Alice offices are directly underneath this bridge on the campus. And so in some small way we seek to support his legacy, and the bridging of the artistic and the technical that is critical for educating today’s students.