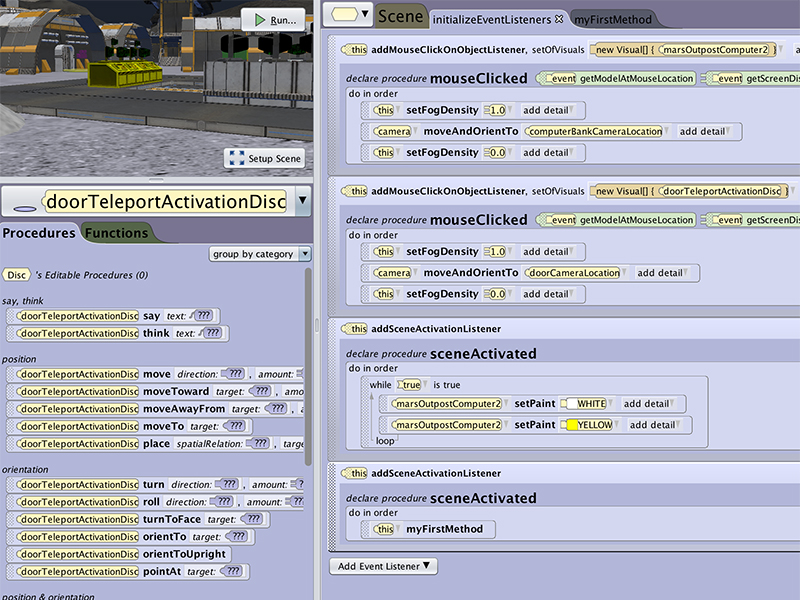 What we mean by teleportation is that the user can move themselves to specific new locations via interacting with the environment to jump to a new location. The ideal movement in VR is to allow the user to move the same distance in real space as they do in VR. Using teleportation you can allow the user to reorient and move their active VR space without them having the disconnect of using the joystick or other control to move themselves through space. This is a common tool in VR with games allowing you to select floor surfaces and more to choose the teleportation target. In Alice you can do this using the mouse click event to select objects that you can program to teleport the user to a new location. The Alice mouse click on object maps to the VR handset point at and click behavior.

There are a couple different things to consider when jumping the player through space:

1. Speed – The speed of movement can increase nausea. It has been shown that normal rates of movement may actually be the most disorienting with slow speeds and rapid speeds resulting in less discomfort.

2. Acceleration and deceleration – As much as possible keeping the user at a constant speed will help. It is also important to try to keep movement as smooth as possible.

3. Orientation – Changing the users orientation especially roll and pitch can be the most disorienting

A standard practice when jumping a user long distances and changing their orientation is to fade out their vision while you do the move to avoid the above issues all together.

Setting up a Teleport

First select or create an object for the user to select as the trigger for the teleportation. This can be an obvious object like a door or you can create your own visual way to highlight locations such as a large bright disc on the ground.

Be sure that the user can see the object that is to be selected from their starting location or the other locations you want them to be able to access it from. Since testing with the ability to move the headset to see full field of view on desktop is not possible you may want to consider putting an objectMoveFor on the Camera just for testing if access to VR is limited. Also remember that you will want to give the user some indication of objects that can be interacted with through some visual language such as flashing, color, or some other means.

Using a Fade Out and Fade In

To ease the disorientation when transporting a user a good mechanic is to fade the scene in and out. A good way to do this is to use the scene parameter Fog to blend out their view. Be aware that the fog color is the same as the atmosphere color so you will be filling their field of view with that color unless you change it.

Use the setAtmosphere color in a do together with the setFog if you want to fade the users view to a different color. To see the difference this has on the experience compare the attached demos:

Being Aware of the VR Space

Remember that when programming the camera marker you are in fact moving the center point of the VR play space. If the user has moved inside their available space they will be in that offset position when they finish the teleport. We are working on a way for you to visualize this space in your scene editor to try to account for where the player can be after a teleport to avoid sending them through walls or inside an object.