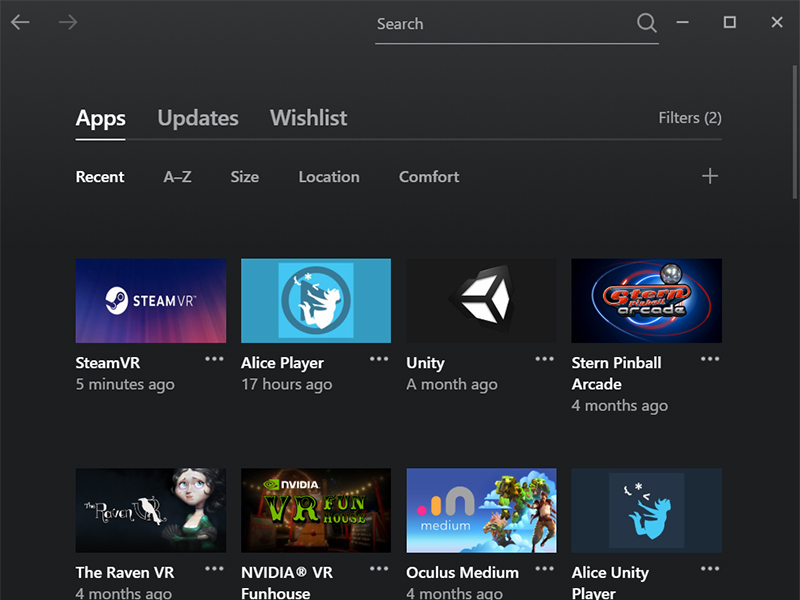 The Alice player is a separate application that allows you to more easily share and run your Alice 3 creations. The player will work with Oculus Desktop VR via the following method. For use with standalone VR players like the Quest not using the Oculus Link look for a separate How to video (feature in development)

To have the player run in VR you need to first start the Oculus desktop application and be sure your VR headset and controllers are properly running. It is key that the Oculus base application is running before you start up the Alice Player so that it will detect that VR is present.

1. Start the Oculus application
2. Ensure that the set-up is properly configured and working and you are able to see and navigate the Oculus home space
3. Start up the Alice Player application
4. This will auto launch the player in the headset and you should now see the Alice Player navigation in the headset.
5. You can now run recent worlds. It will populate with all of the same recent worlds you should see when running on Desktop.
6. You can also load new worlds through the file browser in VR

* If you end up with multiple versions of the player on your computer the library will only show versions that have you have opened using the above method first. Ideally you should overwrite the version on your computer when you upgrade to a newer version.

Once you have started playing a world in the player there are controls for the player that allow you to change the playback speed, restart the world, and return to the main menu to select a new world to play. To access these in Oculus VR use the app menu button on the left controller. This will bring up the same buttons you see at the top of the screen on the desktop player but will be located down and in front of you similar to the Oculus home menu. The button similarly function to:

View the How tos on VR Programming to learn how to map Alice events to the Oculus VR controllers.